A variety of artists and media are represented in our gallery shows throughout the year.  Take some time and view our latest.

Andrea Fuhrman’s paintings and mixed media pieces have delighted viewers ever since she burst on the art scene in the 1990’s. One observer noted that “Andrea Fuhrman conveys the sense of an invented place, one that arises from recollections of environments and souvenirs that are evocative of those memories.“ 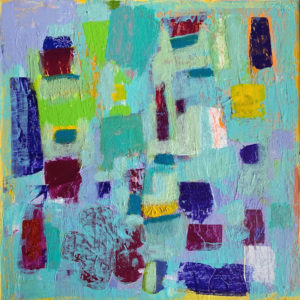 Her award-winning art has been featured in many exhibitions and curated exhibits from California to New York. Andrea’s work is found in some two dozen corporate art collections, and she is the winner of several national awards.

She also creates large installations, such as Splash!, the glass mosaic mural in the Kenwood Cove Water Park in Salina.

She holds an MFA from Washington University in St. Louis and is a resident of Abilene.

Header image: detail from “After the Sandman”, by Matthew Miller